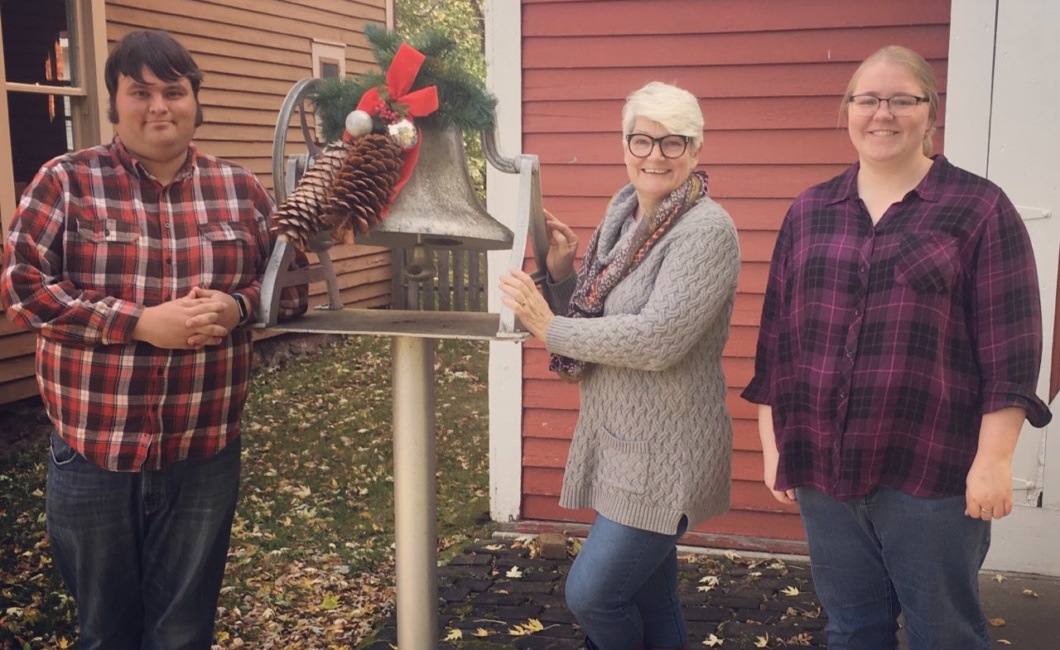 As I sit down to write this update my mind is swimming with all the things that have been happening at the Museum. Early in the year, I was working on designing and building of a storage shelf to be used for all the framed art in the collection. Before that, all the framed art is stored in several different locations in our storage rooms. After it was built, then came the task of moving all the framed art from the Newspaper Room to the West Wing where the storage unit was installed. There are over 88 separate pieces of art, and other flat artifacts, that are being housed in the new unit with plenty of room for growth in the collection! While moving the art, each piece was catalogued into our collection management software, PastPerfect, which included updating the artifact’s description, location, dimensions, and of course adding a photo.

In March, Janet and I staffed a booth at the Early Childhood/Family Education (ECFE) Fair held on March 16 which took place in the MCC gym. Sticking with our “Recreation on the Lakes” theme we brought over the miniature Miss Murray boat so the children could try their hand at fishing and had a craft table set up where they could make their own colorful fish.

During the summer, we hosted three concert for our Dinehart-Holt House Front Porch Music Series. Our three performers were Starfire, Maple Street, and Jazz with Ross & Pete. During our final concert on Aug 1, we held a “RootBear Tasting.” The proceeds towards the event went towards are fundraising efforts to return the wooden staircase bears that were in the Dinehart-Holt House originally. On July 14, we loaded a bus and headed to St. Paul and watched “Gleensheen: The Musical!” at the Minnesota History Theater. It was a super fun day and appre

In October we were visited by about 60 MCC 2nd graders for Pioneer Day. The students were able to explore the Wornson Log Cabin, learn about butter making, and try their hand at pressing homemade apple cider. The second annual Dinehart-Holt House Flashlight Tour attracted over 40 visitors and brought in many people who had not been to the museum before. Also, in its second year was the Trick-or-Treating event at the Dinehart-Holt House. I have always loved Halloween and so being able to light up the large historic house on Linden Avenue these past two years has been a real “treat!”

On October 5, our senior worker Karen Finne received an honor from the Minnesota Genealogical Society for her contributions to the preservation of family and local history. Karen works at the museum digitizing and filing obituaries. She has digitized over 20,000 obituaries. Eventually these names will be placed on the website to increase access by researchers and genealogists.

Next came the International Holiday Traditions Open House in early November. Coordinating tree set up, decorators, advertising, and the open house kept me very busy. To the chagrin of my coworkers, once the trees were set up on October 16, I was fully in the holiday spirit–including playing Christmas music. I want to thank all of the volunteers who helped to set up and decorate trees this year including: MCC First Grade, Trinity Lutheran Church, MCC Spanish II Class, End-O-Line Railroad Park and Museum, Cameron 4-H club, A.C.E. of Southwest Minnesota, the Fulda Memorial Library, Prairie Hustlers 4-H club, Friends of the Slayton Library, the Catholic Daughters, Kiwanis, MCMC Auxiliary, and the Slayton Women of Today! Also in November was the kickoff of the 2019-2020 Lunchbox Lectures with Kathy Miller Brandt, the 2019 Annual Meeting at Painted Prairie Vineyard, and a visit from members of the Lake Wilson Study Club!

In December there were four private rentals and the Annual Volunteer Appreciation at the Dinehart Holt House. The second Lunchbox Lecture was provided by author Phyllis Cole-Dai on her book Beneath the Same Stars: a novel of the U.S.- Dakota War which is now available for purchase at the museum book shop.

I’m looking forward to another busy year here at the museum and hope to see as many of you as possible as visitors to the museum or at events!