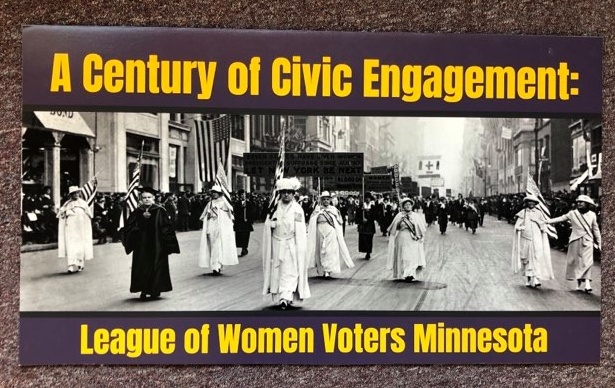 In 2020 the League of Women Voters (LWV) celebrated its 100th anniversary and joined more than 700 other local and state chapters to celebrate this historic milestone. From September 1-30 the Murray County Historical Museum is hosting a traveling exhibit about the history of the LWV and the impact it has had on the state.

In 1920, their founder, Carrie Chapman Catt, believed that within five years, a League of Women Voters could give millions of women voters a crash course in civic engagement and launch them into the American political system. In the 1920s the LWVMN organized presentations across Murray County to educate newly franchised women voters on how to participate in the political realm.

The League was a safe haven for women, regardless of formal party affiliation, to find their voices on issues that mattered to them. As one early leader described it, the League is “like a university without walls … whose members enter to learn and remain to shape the curriculum.” Over the nearly 10 decades of their existence, the League of Women Voters applied the lessons learned in their earliest days to engage and empower all voters.

As the LWV looks to a vibrant future on the threshold of their next 100 years, the League is excited that dedicated members across Minnesota continue to steadily attract significant numbers of activists who share the League’s commitment to Making Democracy Work.

The League of Women Voters president, Chris Carson, issued the following statement regarding the League’s efforts ahead:

“Today we are faced with many challenges that threaten to compromise our democracy. Our efforts to support voting rights and to fight against voter suppression and discrimination at the local, state and national levels have been very successful, and this has been achieved primarily by educating and empowering voters, circulating special petitions, and intervening in several critical court cases.”

The League’s historic commitment to register, educate and mobilize voters is not only stronger, but more effective than ever, utilizing such tools as VOTE411.org—a cutting-edge election information website utilized by millions of voters each election cycle.

One hundred years after the League was founded in 1920, members of the League are proud of the great progress achieved when it comes to truly Making Democracy Work.

Please stop by the Murray County Historical Museum to see this new exhibit during its tenure here. The Museum is open Tuesday through Friday from 10-5 and on Saturdays from 10-2.