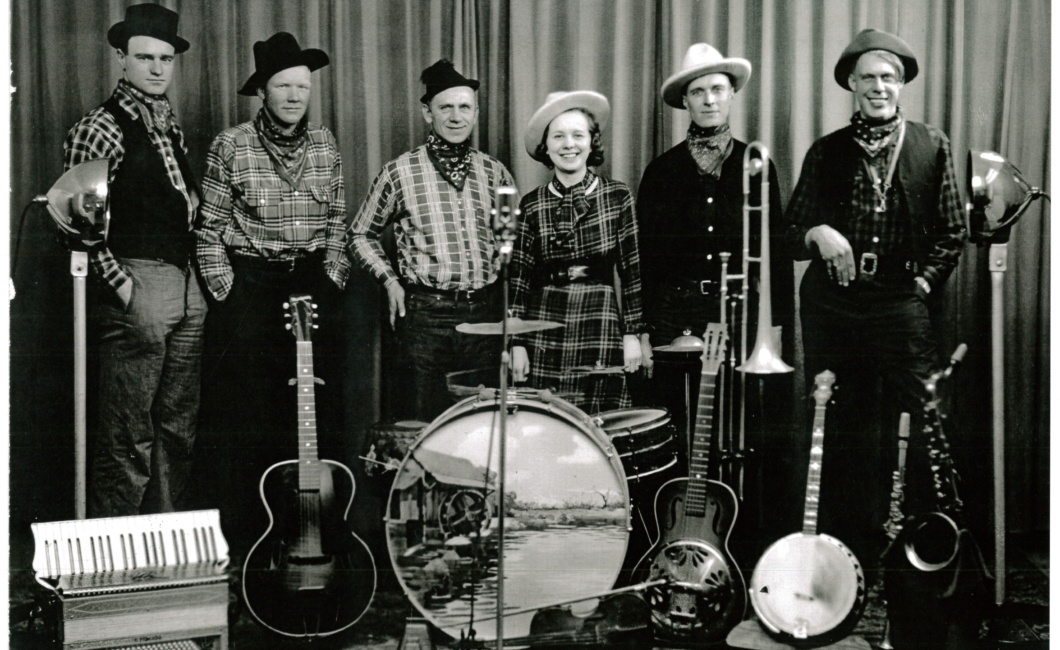 Walt Benton made a difference in the region with his work as a Chicago Northwestern Railroad telegrapher for 42 years and as a regional musician for longer. Top that with his job as the talent scout and booking agent for the Westbrook Rainbow Pavilion dancehall, and you discover a life lived to the fullest.

Walt was born in Illinois, but his mother died when he was only two years old. He went to live with his grandparents in Oldham, South Dakota. In 1915 Walt went to school at the Gale Institute in Minneapolis to be a telegrapher, getting his certificate and going to work for the Chicago Northwestern Railroad. He started at the depot in Miloma, in Jackson County. Hardly a town and more like a way station, the name Miloma came from the two names of the railroads that converged there, Milwaukee and Omaha. Walt met his bride while in Jackson County. He married Laura Pletsch in 1919. Their first home was a small apartment in the upstairs of the depot at Miloma. (See Jackson county hist. Photo 1)

One memorable incident happened in Miloma during Walt’s time there. The sheriff was shot by a thief on the depot platform. They telegraphed for a doctor, but the sheriff died before he arrived. (Daily Globe. 4.7.2011)

Walt served the Chicago Northwestern Company for 42 years serving in 33 different depts, including Slayton, Currie, Dovray, Stordan, Jeffers, Hadley, Worthington, and Pipestone. He started in Dovray in 1930 and was the last station agent there when the depot closed.

In his other life, Walt was a musician, through the 1930’s and into the 1960’s, Walt played with several bands. He often played the banjo or the drums. One of his first bands was Walt Benton and the Hot Points made up of five members; Elmer Deutschman on Saxophone, Arvie Anderson on Trumpet, Margaret Paal on Piano, T.S. Omberson on Sousaphone and Benton on Drums. They played mostly waltzs and polkas.  In 1931 Benton’s band played live sets on Yankton South Dakota’s WNAX radio station, owned by the House of Gurney. During the Dirty Thirties, the Hot Points put on benefit dances for drought relief. (Poster for Hot Points)

By 1939 Benton led the Rainbow Valley Hillbilly Band along with sidemen Clarence Fowler, Lowry Anderson, Lillian Barstad, Glen Horseman and Harvey Peterson. The multi-talented group played dobro, banjo, accordion, saxophone, clarinet, rhythm guitar, trombone and drums.  They played old time schottisches, polkas, and waltzes, but they also included the new country sound, with a modern electric sound system. Their gigs featured Barn Dance Frolics with snappy music interspersed with jokes and schticks. Walt subscribed to the Laughs Unlimited Comedy Crossfire Newsletter that gave them plenty of comic fodder for their gigs. “I got my wife a mink today.” “Boy, I bet she’s proud of that.” “She likes it alright, but the little devil bites everybody on the street!” (Photo of Hillbilly band )

In the first half of 1946, Benton’s band scheduled 48 appearances as far away as Spicer’s Green Lake Pavilion and Sioux Falls, SD. They were booked at Sabin’s Ballroom in Tracy, and the Walnut Ballroom in Walnut Grove hosted the band annually during their winter dance season that ran from October through December in the upper floor of what is now the Bubai Grocery Store.  (Photo of Sabin’s ballroom) Ballroom. They played four consecutive dances at Arnold’s Park, Iowa that February.  The Hillbilly Band was a regular act at the Lyndwood Ballroom in the mid 1940’s appearing monthly on their schedule. Since Walt was also the manager of the Rainbow Pavilion in Westbrook, they were the house band on Wednesday nights through the winters.

Walt, as the band leader, received a percentage of the ticket sales and paid his sidemen a flat fee for each performance.  They were all members of the American Federation of Musicians Protective Association Local #513. For every contract, the union received .70 for the leader and .60 for each sideman. After expenses, mileage and taxes, Walt’s net income ranged anywhere from .15 for a poorly attended dance to $35.00 for a local New Year’s Eve dance. In the last half of 1945 his total net performance income was $251.17. That is about $3580 in today’s dollars.

At the same time that they were on the road most weekends, the band hosted a live show on Marshall’s KMHL radio station. It was called the Hillbilly Barn Dance Jamboree and came on every Monday night at 9:15 PM.  Walt typed out their program line-up, occasionally adding another band like the Larson Sisters to the mix. Each song included who would introduce, who would sing, and the key the song started in. He interspersed jokes and weather information to add some fun. People wrote or phoned in their requests and dedications for the band to play on air. One person phoned in, “Please play a number for Otto, Arlie, and Bud of Marshall. Have Jennie sing “Al.” One fan wrote “I love your electric mandolin. It’s really hot!” (KMHL postcard and sheet of songs)

All through the 1930’s and 1940’s, while Benton was scheduling the band’s appearances and hosting live radio shows, he also served as the talent scout and booking agent for the Westbrook Rainbow Pavilion dancehall, not to be confused with the Rainbow Club located at Teepeotah Resort on Lake Shetek. He was the dancehall manager from 1930 through 1952 when the building was sold. As a testament to the popularity of the dances the ballroom scheduled a dance every Saturday night and often additional Thursday night dances, throughout the year. In 1933 he booked Doc Pettiford and his Oklahomans.  This orchestra was led by Doc, a veterinarian during the day, who was also the father of all the band members; eleven children. He and his wife Leontine, who was a music teacher, taught each child to play an instrument. One of their children, Oscar Pettiford went on to become the “father of bebop,” as a bassist. Oscar was only a boy when the orchestra played the Rainbow, but he went on to play with jazz greats like Miles Davis, Thelonius Monk and Duke Ellington.  Other popular acts at the Rainbow Pavilion during the 1930’s included Tiny Bostic, the Casino Boys, and the Royal Serenaders. Lawrence Welk and his orchestra were also on the roster of bands available for booking.

In the 1950’s Benton hooked up with a smaller trio led by Lloyd Giersdorf, called the Westerners. (Westerner Photo here) Giersdorf and Clarence Fowler played guitar and Walt kept rhythm with drums and filled in on banjo. They had discarded the hillbilly outfits and music for cowboy hats and modern western shirts sporting embroidered horse heads and spinning ropes. Along with the favorite fox trots and waltzes, they played modern country favorites like “Yellow Rose of Texas,” the “Wabash Cannonball,” and “Sioux City Sioux.”  The band also headlined more obscure songs like “Divorce Me C.O.D.” and “I’m Here to Get my Baby out of Jail.”

In the later years of Walt’s life he remained a valuable part of Dovray’s community serving as the city clerk and in 1983 He and Laura, his bride of 64 years, were chosen as Murray County’s Outstanding Senior Citizens. Walt was a life long member of the Order of Railroad Telegraphers and the American Musician’s Union. He lived according to the tagline on the band’s advertising posters. “Don’t miss one of these parties. If you can’t dance, just vibrate, you’ll like it!” (Poster from Westbrook Wed. Dance.)